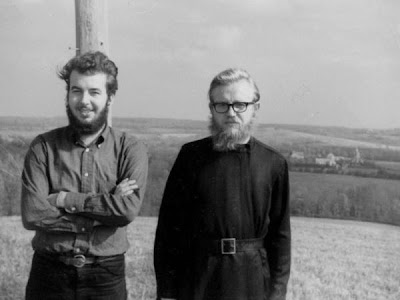 Anyone who follows Orthodox discussion lists on the Internet will be familiar with the name of Fr John Shaw. As I mentioned in an earlier post, Fr John has since received monastic tonsure with the name Jerome (Ieronim in Russian) and been consecrated Bishop of Manhattan. He currently serves Deputy Secretary of the Synod of Bishops. Here, for your interest, is a brief autobiography:

I was born to an American family, of English ancestry and Protestant religion, on Dec. 21, 1946. I was raised by my maternal grandparents, in a small Connecticut town, not far from the 'Russian Village' of Churaevka (Southbury, CT), where I had my first real contacts with the Orthodox Church. In school, I enjoyed the study of foreign languages, and began learning Russian and Greek on my own from age 14. When I was 16 years old, I had already become interested in Orthodox Christianity through reading and personal contacts. I first went to visit St. Sergius Russian Orthodox chapel in Churaevka, on Lazarus Saturday (March 24/April 6 that year). There, I made the acquaintance of the future Bishop Daniel of Erie and his mother, and that evening went with them to the Night Vigil service at Mahopac. That day, the discussions we had about the Orthodox faith, and my first experience of worship in the Russian Church, left a lasting impression on me that remains vivid even now.

After a few weeks, I began attending Russian Orthodox services instead of the Anglican (Episcopal) church in which I had, till then, been raised.I was fortunate enough to spend the whole summer of 1963 in Greece, where, in Orthodox surroundings, I made a firm decision to embrace the Orthodox faith, and also gained practice in speaking the Greek language. My grandfather, with whom I lived, had urged me not to make any religious change till I was at least 21 years of age, but by the time I returned to America, I was already firmly convinced that the the Orthodox Church is the One, True Church, and I was chrismated on the day after my 17th birthday. It was a step I have never regretted.

Thus already a member of the Orthodox Church while in high school, I served as an altar boy for Archbishop Seraphim (Ivanov) of Chicago, when he visited Mahopac, and it was his memory of me from then, that would one day lead Vl. Seraphim to ask for my assignment as priest for his Chicago cathedral. After high school, I studied at the University of Pittsburgh, where I majored in Slavic linguistics and East European history, and graduated in 1968. I also went to summer classes in Munich, Germany, at the Institut zur Erforschung der UdSSR, attended the ROCOR cathedral in Munich and the monastery in Obermenzing, and visited Russia for the first time in the summer of 1967 together with other students at Munich.

After graduation from college, I enrolled in Holy Trinity Seminary in Jordanville, NY, where I was fortunate to have, as teachers, Vl. Averky, Vl. Lavr, Protopresbyter Michael Pomazansky, Archimandrite Constantine (Zaitseff), Fr. Mitrofan Znosko-Borovsky, Prof. Ivan M. Andreev, and a number of other excellent 'nastavniki' of the Orthodox faith. In the fall of 1970, I was tonsured a reader by Archbishop Averky. As our class prepared for graduation, Fr. Victor Lochmatow suggested that I serve as a helper for Archbishop Nikon of Washington and Florida, and for the next 5 and a half years, I was Vl. Nikon's subdeacon, translator, secretary and chauffeur. Those years with Vl. Nikon were as important a part of my education, as the previous years in Jordanville had been. In April of 1976, on the advice of my spiritual father, Archimandrite Kiprian (Pijoff), and with the blessing of Metropolitan Philaret, I was ordained a subdeacon, deacon and then priest, and served for a few months at St. Vladimir Memorial Church in Jackson, NJ. After the sudden repose of Archbishop Nikon on Sept. 4, 1976, Archbishop Seraphim arranged to have me assigned as priest to the Chicago cathedral, where I served from 1976 to 1991. In March of 1991, when there was a need for a priest in Milwaukee, WI, Fr. Victor Lochmatow suggested that Archbishop Alypy assign me there as pastor, and I served the Milwaukee parish from then until my present reassignment to the Synodal cathedral in Manhattan. On Tuesday, May 13, 2008, I received a phone call from ROCOR's newly elected Metropolitan Hilarion, in which Vladyka Metropolitan asked me to serve the Church as a bishop. On November 27/December 10, 2008 on the feast of Kurskaya Korennaya [Kursk-Root] Icon I was consecrated Bishop of Manhattan in the Synodal Cathedral in New York by Bishops Gabriel, Peter and John. By mutual agreement, Bishop Peter of Cleveland (who was my classmate in the Jordanville class of 1971) presided at my consecration.

Bishop Jerome is the one of three converts currently serving as a bishop in the Russian Orthodox Church Abroad, along with Archbishop Mark of Berlin and Germany (a convert from Lutheranism) and Bishop George of Mayfield (a convert from Roman Catholicism).


overseas education consultants in hyderabad do you want to study in abroad today or in the next intake. we are the best and top rated study abroad consultancies in india with good visa assurance.we help you in filing the f1 visa for you in very less time. reputed overseas consultancy in hyderabad we are also help you with information needed to apply for the college university.