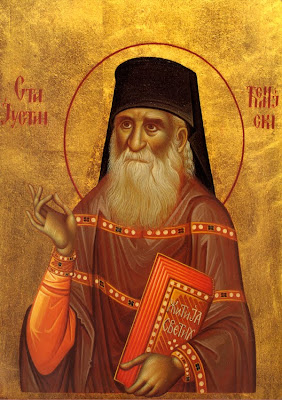 My friend Fr Luke Hartung sent along the following from the Western American Diocese of the Serbian Orthodox Church:

Christ is Risen!
His Grace, Bishop Maxim has requested that all parishes sing the troparion of Saint Justin of Celie in the Liturgy!

Apolytikion mode 1
Let us honor with splendor the divinely inspired theologian, the wise Serb Justin, who by the scythe of the Holy Spirit hath thrashed the error of atheism and the insolence of the Latins, being a mystic of the God-man and lover of piety, crying out: Glory to Christ Who hath glorified thee, glory to Him Who hath crowned thee, glory to Him Who hath rendered thee a luminary to those who are in a state of darkness.

Kontakion mode 1
We proclaim to the faithful the inexhaustible fount conveying the Orthodox doctrines, and an angel-like man full of divine zeal, the divine Justin, the offspring of the Serbs, who by his sound teachings and writings hath strengthened the faith of all in the Lord.

29. April 2010 - 22:33
On its afternoon session of April 29 of this year, the Holy Assembly of Bishops of the Serbian Orthodox Church unanimously adopted recommendations of the competent diocesan bishops and entered into dyptichs of the saints of the Orthodox Church names of the blessed repose of archimandrite Justin Popovic, geront of the monastery Celije near Valjevo (1894-1979), from now Venerable Justin of Celije, and Simeon Popovic , prior of the monastery Dajbabe near Podgorica (1854-1941), from now Venerable Simeon of Dajbabe.

Just a question. Are there any other troparia that specify the ethnic origins of the Saint?

I cannot bring to mind any.

I was going to comment precisely on this point, Maximus, but I'm glad you brought it up first.

I find it a little troubling that the troparia and kontakia for the newly-revealed Saints, Nikolaj of Žiča and Ohrid and Justin of Čelije, put such emphasis on the fact that they are ethnic Serbs: as we have seen, the hymns for St Justin call him "wise Serb Justin," the "offspring of the Serbs," whereas the hymns for St Nikolaj speak of him as the "guide of the cross-bearing Serbian people," "born in Serbian Lelich," and ask St Nikolaj "of Serbia and all Orthodoxy" to intercede before Christ along with "all the saints in heavenly Serbia" that He may grant "peace and unity to our people."

Of course, similar expressions may be found in other troparia and kontakia: for instance, the hymns for St Sava say such things as "you enlightened your fatherland, giving it birth by the Holy Spirit" and "the Church of your people glorifies you." This, however, doesn't seem much different from the troparion to St Vladimir speaking of "the throne of God-protected Kiev" and asking him to intercede "for Russia and all peoples"--or, for that matter, from the troparion "Nebojavljenago" (sung in the Serbian use after "i vsjeh i vsja" at the Liturgy of St Basil), which speaks of St Basil as "the shining light from Caesarea in Cappadocia." The difference in all these cases is that, unlike in the hymns to Sts. Justin and Nikolaj, the focus is not precisely ethnicity (though, admittedly, the hymns to St Nikolaj lean more in this direction).

Anyway, it should be noted that the liturgical services to these newly-revealed Saints have not yet been composed in full, and that therefore we may see changes in these hymns once the full services appear.

This is not a Troparion to St Justin of Monastery CELIJE. This is:

Troparion tone 8
Orthodox sweetness, nectar of wisdom, Saint Father, you are flood in believers hart like wealth,with one's life and teaching you reveal self like a live book of Spirit, Justine Divine wisdom pray to the Christ God Logos, to cover with logos they who respect You (Justine).