Archbishop Averky on the Incredulity of Thomas 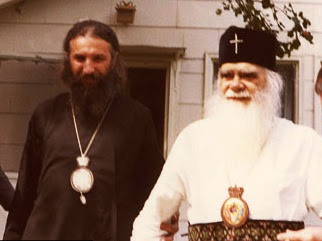 I am posting here my thorough revision and correction of a provisional English translation found online of Archbishop Averky's commentary on John 20:24-31, the Gospel reading for Thomas Sunday:

But Thomas, one of the twelve, called Didymus, was not with them when Jesus came. The other disciples therefore said unto him, We have seen the LORD. But he said unto them, Except I shall see in His hands the print of the nails, and put my finger into the print of the nails, and thrust my hand into His side, I will not believe. And after eight days again His disciples were within, and Thomas with them: then came Jesus, the doors being shut, and stood in the midst, and said, Peace be unto you. Then saith He to Thomas, Reach hither thy finger, and behold My hands; and reach hither thy hand, and thrust it into My side: and be not faithless, but believing. And Thomas answered and said unto him, My LORD and my God. Jesus saith unto him, Thomas, because thou hast seen Me, thou hast believed: blessed are they that have not seen, and yet have believed. And many other signs truly did Jesus in the presence of His disciples, which are not written in this book: But these are written, that ye might believe that Jesus is the Christ, the Son of God; and that believing ye might have life through His name (Jn 20:24-31).

The Evangelist John notes that at the Lord’s first appearance to all His disciples, who were gathered together, the Apostle Thomas (called the Twin, or Didymus in Greek) was absent. As is evident from the Gospel, this Apostle’s character was distinctive in its persistence, bordering on stubbornness, which is characteristic of people of a simple but firmly formed viewpoint. Even when the Lord was going to Judea to raise Lazarus, Thomas expressed his conviction that nothing good would come of that journey: "Let us also go, that we may die with Him" (Jn 11:16). When the Lord said to His disciples in His parting discourse: "And where I go you know, and the way you know," Thomas began to contradict here, too: "Lord, we know not whither Thou goest; and how can we know the way?" (Jn 14:5).

The Teacher’s death at the cross therefore produced an especially painful, dispiriting impression on Thomas: it was as if he had stagnated in the conviction that His loss was irretrievable. His spirits were so low that he was not even with the other disciples on the day of the Resurrection: he had evidently decided that there was no purpose in being together, because everything was finished, everything had fallen apart, and now every disciple had to lead, as before, his own individual, independent life. And then, having met the other disciples, he suddenly heard from them: "We have seen the Lord." In full accord with his character, he sharply and definitively refuses to believe their words. Considering the Resurrection of his Teacher to be impossible, he declares that he would believe this only if he not only saw with his own eyes, but also felt with his own hands the nail wounds on the Lord’s hands and feet, as well as His side that had been pierced by a spear. "And thrust my hand into His side" — from these words of Thomas it is evident that the wound inflicted by a soldier on the Lord was very deep.

Eight days after the Lord’s first appearance to the ten Apostles, the Lord once again appeared, with "the doors being shut," evidently in the same house. This time Thomas was with them. Perhaps, under the influence of communication with the other disciples, his obdurate disbelief had begun to leave him, and his soul had slowly become again capable of faith. The Lord appeared to inflame this faith in him. Appearing, as in the first case, perfectly unexpectedly among His disciples and having granted them peace, the Lord turned to Thomas: "Reach hither thy finger, and behold My hands …" The Lord responds to Thomas’s doubts with the very words with which he had conditioned his belief in His Resurrection. It is clear that the Lord’s knowledge of his doubts alone should have amazed Thomas. The Lord added to this: "be not faithless, but believing," that is: you are in a decisive position: there are now only two paths before you — full faith or decisive spiritual hard-heartedness. Although in the Gospel it does not say whether Thomas in fact touched the Lord’s wounds, one can assume that he did. In any case, faith was greatly inflamed within him, and he exclaimed: "My LORD and my God!" By these words Thomas confessed not only his belief in Christ’s Resurrection, but also in His Divinity.

Nonetheless, this faith was based on sensual attestation, and therefore the Lord, for the edification of Thomas, the other Apostles, and all people of all ages, reveals the loftiest path towards faith, praising those that have attained faith not in the sensual way that Thomas had: "Blessed are they that have not seen, and yet have believed." The Lord had previously more than once given priority to faith that is based not on miracles, but on words. The spread of the faith of Christ throughout the world would have been impossible if everyone had demanded the same confirmation of his belief as had Thomas had, or continuous miracles in general. Therefore the Lord praises those who attain faith alone through trust in the testimony by word, through trust in the teaching of Christ. This is the best path to faith.

With this narrative Saint John concludes his Gospel. Chapter twenty-one, which follows, was written by him later, after a certain period of time, as is thought, because of the rumor that he was appointed to live until the Second Coming of Christ. For the moment, Saint John concludes his narrative with the testimony that "many other signs truly did Jesus in the presence of His disciples, which are not written in this book" – although Saint John had set himself the goal of supplementing the narratives of the first three Evangelists, he himself recorded not everything, far from it. At the same time, however, it is evident that he feels that what has been written is sufficient "that ye might believe that Jesus is the Christ, the Son of God; and that believing ye might have life through His name" — and that little which has been written is sufficient for the confirmation of faith in Christ’s Divinity and for salvation through this faith.

It is interesting that Vl. Averky and Vl. Anthony each interpret John 11:16 differently. For +Averky, "let us go and die with him" is a sarcastic comment showing Thomas' stubborn nature and pessimism, while the Metropolitan sees this as a sign of Thomas' conviction and steadfastness.

Moreover, Vladyka Averky takes Thomas' disbelief quite seriously, whereas Vladyka Anthony seems to suggest that the Apostle only needed confirmation.

I've noticed that much Orthodox commentary on this reading (and feast) seems equally divided: some taking a somewhat more negative reading, looking at Thomas as, so to speak, the incarnation of doubt; while others take a more positive approach, insisting that we are not celebrating his doubt, but rather his belief.

Did you know that you can create short links with AdFly and receive money for every visit to your shortened links.