Mental Disorders and Spiritual Healing (5 of 5) 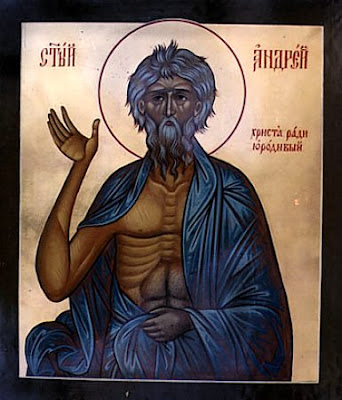 The fifth and concluding chapter of Jean-Claude Larchet’s remarkable study, Mental Disorders and Spiritual Healing, is devoted to “A Most Singular Kind of Folly – The Fool for Christ.” The true fool for Christ, Larchet notes, should not be confused either with the illiterate or the “innocent” (such as Dostoevksy’s Prince Myshkin). Speaking of the true fool for Christ, Larchet writes: “Not only do they not suffer any intellectual handicap, but in reality, as we shall see, they possess a superlative ability to feign their state of insanity, to perfectly adapt it to the situations they encounter and the spiritual goals they wish to achieve, giving symbolic significance to their acts and their words, and concealing the good they do.” The fool, “by his incoherent speech and disorderly actions, or, to the contrary, but his mutism, exhibits symptoms characteristic of real insanity.” But it must be insisted that “he is even completely sound of mind.” He is like an actor, “who totally invests himself in his role, but nevertheless remains himself.”

Scriptural foundations for this brand of ascesis can be found among the Prophets of the Old Testament, as well as in St Paul’s many words about how the wisdom of the world is foolishness with God – although in the latter case, “foolishness” is “taken in the spiritual and not psychopathological sense, unless by analogy.”

The two fundamental motives for taking upon oneself the podvig of foolishness are humility and detachment from the world. The fool is detached from the world “by means of three traits favored by this state, namely solitude (exterior and interior), the status of stranger, and poverty.” A third motive is charity, particularly with regard to the most deprived. Foolishness for Christ’s sake has its own spiritual presuppositions: a call from God or a personal vocation approved by God and an already highly accomplished spiritual life. Larchet concludes with these words:

Lastly it would appear that foolishness for Christ constitutes a special ascetic path enabling the individual to realize three Christian virtues: humility, detachment from the world, and charity. The salos [fool] uses simulated madness to seek out and experience the first by means of humiliations which this counterfeit state draws upon him in surroundings rather intolerant of fools, to realize the second by making himself a wretch and a pariah, to practice the third hidden from the eyes of the world, and by keeping as close as possible to most destitute. All the characteristics generally recognized can be connected, in our opinion, to one or another of these three virtues.

However, this detachment achieved in extreme poverty and by becoming a stranger (xeniteia) can just as well be lived in the ordinary monastic state, especially the eremetic. As to charity for those on society’s fringes, it can be exercised secretly outside of the status of fool, but it also characterizes the saloi living in cities, As a result the only characteristic common to all saloi and truly specific to their state seems to be a maximalist search for humility, constantly experienced through the disdain, humiliation, and suffering unjustly endured “for Christ.”

I would recommend this remarkable study without reservation to all.
Posted by Felix Culpa at 6:19 AM

Professional trading signals sent to your mobile phone every day.

Start following our trades right now and profit up to 270% daily.